Hey all! This tutorial is surely in need of improvements, but something is better than nothing. If you don't feel like reading the whole thing, at least take note of these 2 important points:

1) The dashboard must be open in a tab at all times for Turkmaster to work correctly. It's not optimal, but that's how it works (for now). A lot of people miss this point and run into trouble.

2) Back up your watchers on a regular basis. There is some weird bug that I haven't tracked down that can make you lose all of your watchers when you least expect it. This has happened to me multiple times (so don't feel alone) and was why I added the backup feature in the first place.

This list may grow in the future, but those are the 2 things I feel that everyone with the script should know before they even start using Turkmaster. Now on to the details... 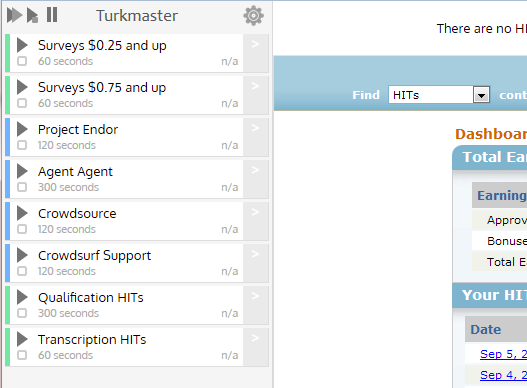 There are 3 types of watchers: Requester, URL, and HIT. Depending on the type of watcher there are a few options such as sounding an alert like PageMonitor and auto-accepting a HIT. When auto-accept is on you have an option to make it stop after catching a HIT (useful for surveys) or you can let it continue to auto-accept for batches.

Clicking the button will bring up a form for you to give the watcher a name, set the interval time, and choose various options. 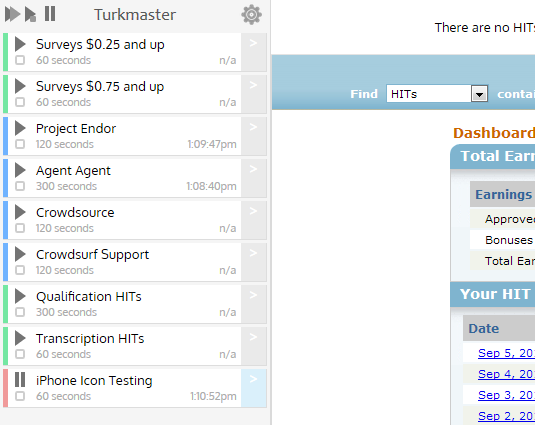 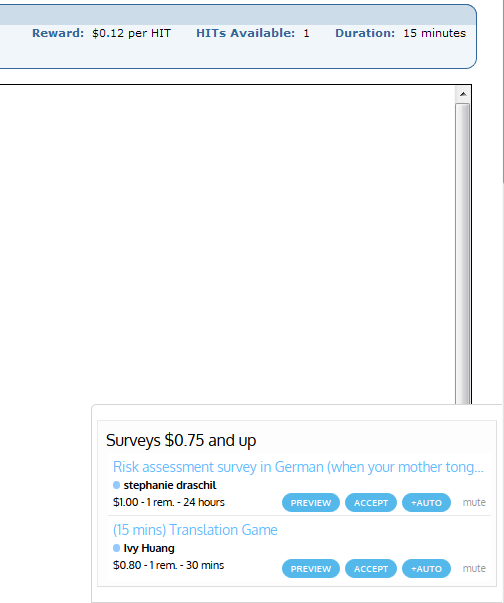 Here's an example of a notification for surveys 75 cents and up. You can preview or accept a HIT directly from a notification. The "+auto" button will accept the HIT and select the check box to auto-accept the next HIT. Click on 'mute' if a notification comes up that you don't want receive a notification for. This only mutes individual HITs. To ignore a requester, hover over the requester's name and click on the "ignore" link that shows up.


Things You Should Know

For this script to work properly you will always need to have the dashboard open in a tab and it'll only run in a single dashboard tab. The script will disable itself in any other dashboard tabs if it's already open in an existing tab. It had to be done like this because of the way the tabs communicate with each other.

The notifications shown above will only show on Mturk pages. However, if you want to see the notification while browsing a forum, Reddit, or doing anything else, there is an option for desktop notifications. You won't be able to preview or accept HITs with those notifications, but clicking on them will bring the dashboard to the foreground with the notification highlighted (I've heard that this doesn't work for some people anymore on Chrome - I have to look into it) so you can accept from there.

@Kerek's hotfix for the missing "Watch this HIT" button caused by changes to mturk. Thanks

@Kadauchi!
2015-10-17 - Fixed an issue with playing sound on Chrome (still unsure why the old code stopped working)
2015-08-18 - Added the ability to mute a panda watcher after the first HIT is caught (for those that don't want to keep hearing the sound afterwards)
2015-08-09 - Added an option to disable the stop on captcha feature. Also changed the colors for running and updated watchers so they stand out more.
2015-04-02 - Changed TO servers (wow, it's been a while!)
2014-11-06 - Quickfix for Turkmaster elements disappearing
2014-10-22 - Updated Turkoption URL to new proxy. Thanks Miku! Oh and fixed a typo, too. Thanks spamhead.

2014-10-12 - Fixed issue with watchers not loading. Also no longer loading external resources from non-https sites.
2014-10-09 - Watchers and user settings should persist after clearing browser history. Settings changes should save immediately. TO has cached ratings and other fixes. Other minor bugs were fixed, as well.
2014-09-26 - Added the ability to export and import watchers
2014-09-21 - Added the ability to hide the watcher list to save space. Last seen hits are remembered after the page is reloaded.
2014-09-21 - Added TO links, chart and color coding
2014-09-07 - Added the ability to ignore requesters. Hits from ignored requesters won't show up in notifications and will be faded out on the dashboard list.
Last edited: Apr 14, 2016
Reactions: Cara, Empress328, Kadauchi and 4 others

I Don't Know What I'm Doing

Can anyone tell me what the colors on the left side of each watcher means? Someone mentioned in a thread today that green means a page is being watched, but what about the blue and red?

WordVixen said:
Can anyone tell me what the colors on the left side of each watcher means? Someone mentioned in a thread today that green means a page is being watched, but what about the blue and red?
Click to expand...

Green means the watcher is watching a certain search page (like the word "survey" at above a dollar.)

Blue is a requester watcher, so it will alert whenever that requester posts.

Red is a HIT watcher, so it will alert whenever a certain HIT is posted (by groupID.) These can also be used to panda HITs if you set the timer low and allow auto-accept.
Reactions: WordVixen

I Don't Know What I'm Doing

TSolo315 said:
Green means the watcher is watching a certain search page (like the word "survey" at above a dollar.)

Blue is a requester watcher, so it will alert whenever that requester posts.

Red is a HIT watcher, so it will alert whenever a certain HIT is posted (by groupID.) These can also be used to panda HITs if you set the timer low and allow auto-accept.
Click to expand...

Thank you so much! TM has been working great for me so far, but not knowing what they meant made me nervous.

Hi Donovan. Thanks for the tutorial. On the ignore feature, does that ignore requesters indefinitely, ie you will never ever see requests from that person again? Can you clear it out besides reclicking the ignore button?

I was just thinking, man it would suck if they posted a new hit but I clicked ignore awhile ago. I like clicking ignore rather than mute because it shows that I have done the hit or checked it out vs just having the muted in the corner. It takes to long imho to see if it has been muted, if the hits are opening fast.

I am also coming up on a page that says some like, you have exceeded maximum views or hits of this page. I can't remember exactly. But it's blocking me from accepting a hit or seeing my assigned hits sometimes.

Thanks for any help!
You must log in or register to reply here.
Top Bottom